Estrogen Dominance is a common imbalance among women these days. It can make you feel miserable, keeping you in pain, exhausted, and overweight. It can lead to insomnia, mood swings, lumpy breasts, painful or irregular periods, fibroids, thyroid nodules, uterine polyps, and even infertility or a tendency toward miscarriages. It can even set you up for cancer down the road.

Over 70% of women experience estrogen dominance at some point in their lives and 90% don’t know that’s what’s going on. Why is Estrogen Dominance so common these days?

There are lots of reasons for this, all around the areas of diet (especially sugar and inflammatory foods) and lifestyle (including high stress, lack of sun, and chemical exposure). Besides that, our world is more toxic and full of synthetic estrogens than ever before.

The good news is: you can give your body much needed support to help it to detoxify these estrogens and improve how these estrogen metabolites are broken up to “clean/protective” and “dirty” estrogens. The key organ that plays a role here is your liver – this is the organ that will help remove many toxins, including estrogens. Estrogen detoxification is an important process that needs extra support in a toxic world.

There are many ways to support your liver. As an herbalist, I have a special affinity and deep respect for herbs and various botanical ways. There are a lot of liver-supporting herbs we can eat or take in the form of teas or supplements to support estrogen detoxification. Many of these can be incorporated into meals and recipes or enjoyed as a therapeutic tisane (herb infusion).

This article will cover the top herbs I recommend for supporting the liver and their ability to detoxify toxic and excess estrogen from the body to restore hormone balance.

What is Estrogen And How Do We Know If We Have Too Much?

Estrogen is generally known as the female hormone, but both men and women have estrogen in their bodies. Women just have more of it. Sometimes we even have too much of it in relationship to its opposing hormone, progesterone. That can happen due to one or more of the following situations:

Ultimately, these imbalances may lead to the chronic condition of Estrogen Dominance. Some symptoms that tell us if we have too much estrogen include: PMS, cellulite, varicose veins, belly fat and hip fat, thinning hair, endometriosis and infertility, thyroid nodules, and hormone-sensitive cancers: breast, thyroid, ovarian, or uterine (endometrial).

Note: If these are familiar symptoms to you and you’d like to know how estrogenic you are, take our free Estrogen Quiz here.

What Role Does the Liver Play in Estrogen Detoxification?

In phase I, estrogen is broken down into metabolites that are more dangerous than the estrogen was at the beginning. Then, in phase II, it’s combined with another compound that makes it less toxic.

If phase II isn’t working as well as it should, then the highly toxic chemicals formed in phase I can’t be combined with other compounds and sent down the next pathway. This results in excess hormones, like “dirty” estrogens, that recirculate in the bloodstream instead of being eliminated. The result is hormonal imbalances, including estrogen dominance with all its symptoms.

This can also happen for phase I. If the P450 enzyme isn’t activated with the presence of important nutrients like B vitamins, vitamin C, and the master antioxidant, glutathione, these excess hormones and metabolites will get recirculated and contribute to ongoing hormone imbalances.

To find out whether your liver could use some support, first read Symptoms of a Sluggish Liver. Then, learn more about how the liver impacts your hormones by reading How to Optimize Liver Function to Rebalance Hormones in Women.

Bile is a substance produced by the liver that also plays a role in estrogen detox and hormone balance. It’s produced in the liver and stored in the gallbladder. Then it’s released when we consume fats. It helps us to emulsify them and make them available for HDL cholesterol, which is the precursor to all steroid hormones, which we can’t function without. These include estrogen, progesterone, cortisol, DHEA, and testosterone.

Our Approach to Estrogen Detox

At Hormones & Balance, we first look at how we can balance hormones holistically before turning to hormone replacement or other medications. There are a number of foods, herbs, and supplements that can help support the liver and its detoxification of estrogen.

The herbs listed below are some of my top recommendations for supporting the liver so that it can efficiently detox excess estrogen and keep our hormones in balance. 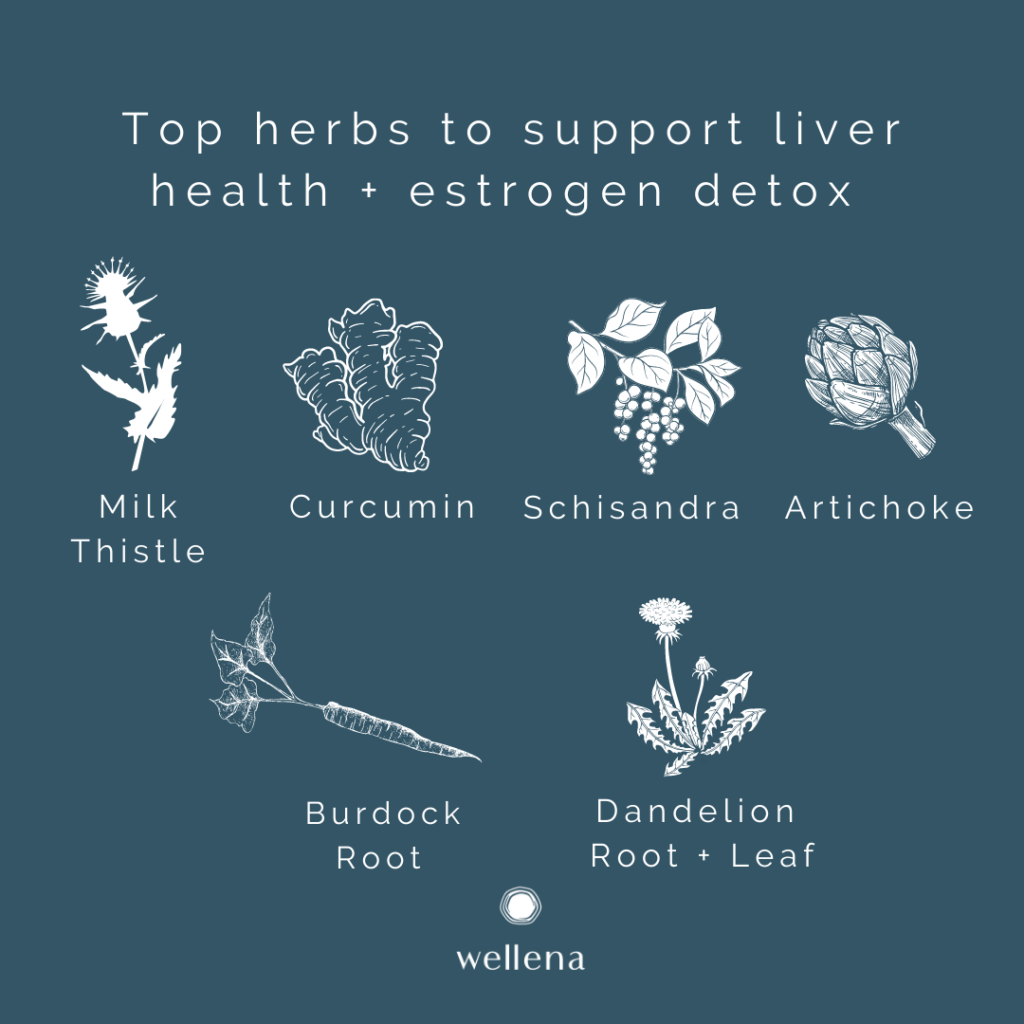 Here are some of the top herbs I recommend to support liver health and estrogen detoxification. They support both Phase 1 and Phase 2 liver detoxification.

Milk Thistle (Silybum marianum) is one of the top go-to herbs for liver support. Silymarin, a collection of active compounds in milk thistle, has been shown to fight free radicals, lower inflammation, protect the liver against fibrosis, and reduce injuries to the liver from toxins. (2) It’s been used in the treatment of chronic liver disease, cirrhosis, and liver cancer. (3)

Milk thistle even helps with the regeneration of the liver cells and promotes bile flow, helping the liver to eliminate excess estrogen and other toxins and to digest fats, which are important in creating sex hormones like estrogen and progesterone. (4)

The seeds can be combined with fresh ginger to make a delicious, anti-inflammatory tea that is soothing to the liver. You can find that recipe here.

You can also make a Liver Supporting Milk Thistle Salt to add to salad dressings, marinades, or simply as a table salt for seasoning your meals. Artichoke (Cynara scolymus) is another liver-supporting herb that also supports estrogen detoxification. Artichoke protects the liver from damage and may even help regenerate liver cells. It also boosts the liver’s production of bile, which in turn, helps it eliminate excess estrogens. (5)

Artichokes can be made into dips, added to Italian or Greek main dishes, or taken as a supplement. However, because the active compounds are mainly found in the leaves, it’s more effective to take the artichoke leaf extract rather than eating artichokes as a whole food. (5) 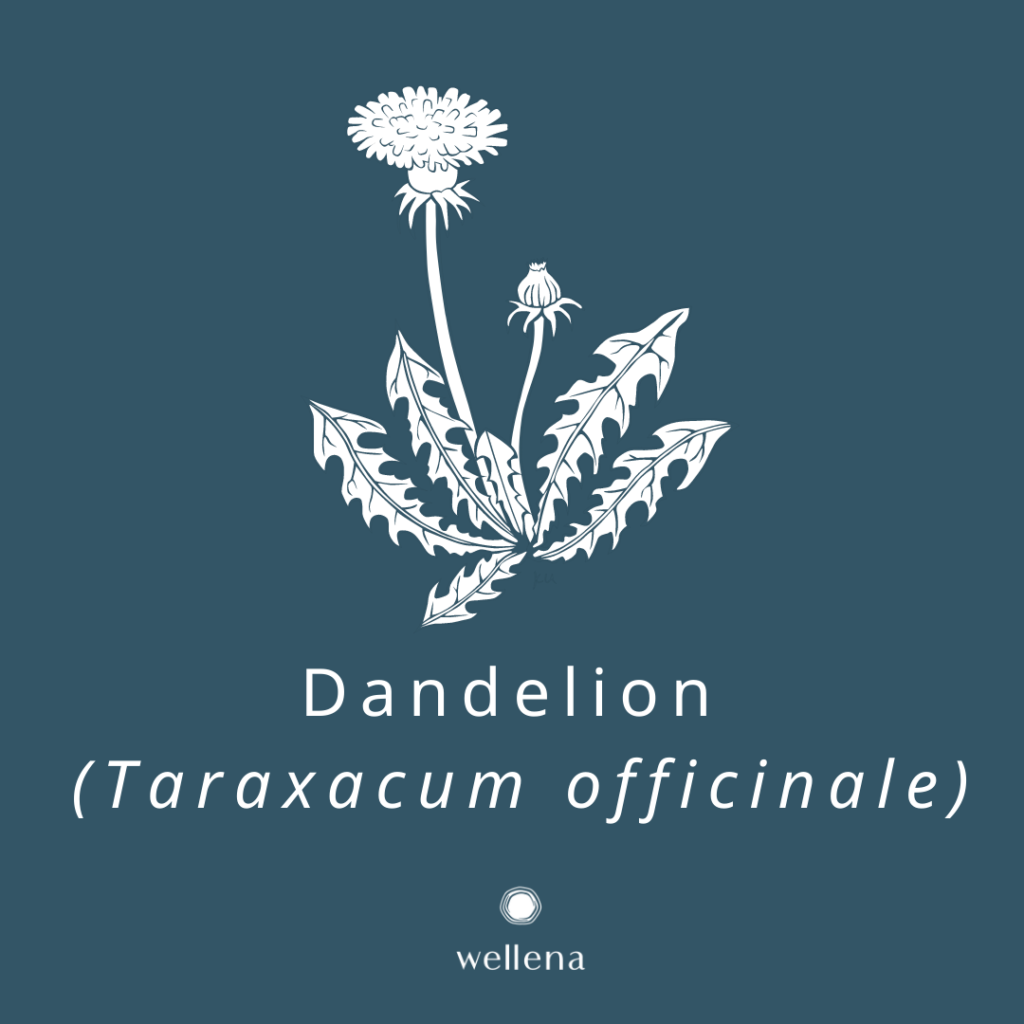 While it’s a frustrating herb for the “perfect lawn” connoisseur, dandelion (Taraxacum officinale) has many health benefits. Dandelion root (especially roasted) is often used as a coffee substitute, while the leaf is a bitter herb that can be added to pestos, salads, or a fresh pressed juice. Both parts of this plant serve as powerful liver support.

Dandelion has been known since ancient times for its health-promoting properties, including treatment of hepatitis and other liver disorders. (6) It’s also been shown to stimulate bile production, which helps it work as a detoxifying and break down excess estrogens and byproducts of estrogen metabolism. (7) Burdock root (Arctium lappa) is a mild liver herb. It has long been used in Traditional Chinese Medicine (TCM) and the roots, seeds, and leaves have all been used therapeutically. (8)

Because of its powerful effects on the liver and bile flow, burdock makes up a good portion of our Wellena After Meal Digestive Bitters. Curcumin is the main active component of the spice turmeric (Curcuma longa). While it’s especially known for its anti-inflammatory activity, curcumin is also an excellent herb for promoting liver health and estrogen detoxification. The whole (turmeric) powder usually works better than curcumin on its own; however, adding piperine from black pepper (Bioperine®) or a source of fat helps with absorption.

Curcumin supports the liver by increasing glutathione for detoxification, lowering inflammation, and protecting the liver with its antioxidant effects. (13)

Powdered turmeric can be combined with black pepper and honey to make a healing paste. The richer the color, the better the powder. There are many ways to include curcumin in your day, including Turmeric Chai Lattes, curries, and supplementation, such as Inflammavail. Schisandra (Schisandra chinensis) is a Siberian berry that protects the liver from toxins, lowers inflammation, increases bile flow, and promotes liver detoxification. (14, 15) It’s also a great herb for the immune system and it’s considered an herbal adaptogen that helps the body adapt to stress. That’s why it’s traditionally used to support the adrenals.

You can buy schisandra berries from Mountain Rose Herbs and add them to bone broths. You can also use them to make an Immune-Boosting syrup like Oxymel. AND you can make schisandra part of your daily regimen by taking our digestive bitters. Schisandra is an important part of our Wellena BEFORE meal formula.

Andrographis (Andrographis paniculata) is a revered herb in Ayurvedic and Traditional Chinese Medicine (TCM). Ayurvedic medicine in particular uses it for liver disease. (10)

Research has confirmed using andrographis for liver health. According to a Chinese study published in 2010, andrographis and its extracts lower inflammation, fight infections, and support liver detoxification. They also suppress tumor formation, meaning they are anti-cancer. (11)

Additionally, a review study published in Phytotherapy Research found that andrographis with the right phytochemical levels was great at lowering inflammation in the liver. (12)

Andrographis is also a great support for the gallbladder, as it stimulates the production of bile.

Andrographis is one of the most bitter herbs, known for its ability to stimulate digestive juices, including bile from the gallbladder, That’s why it makes up a significant part of our Wellena After Meal Digestive Bitters.

As you can see, herbs play an important and necessary role in liver health and estrogen detoxification. Choose one of the herbs that piques your interest and incorporate it into your everyday routine to see its benefits.