How I Avoided A Hysterectomy—One Woman’s Story of Stress, Nutrition, and Healing Ovarian Cysts 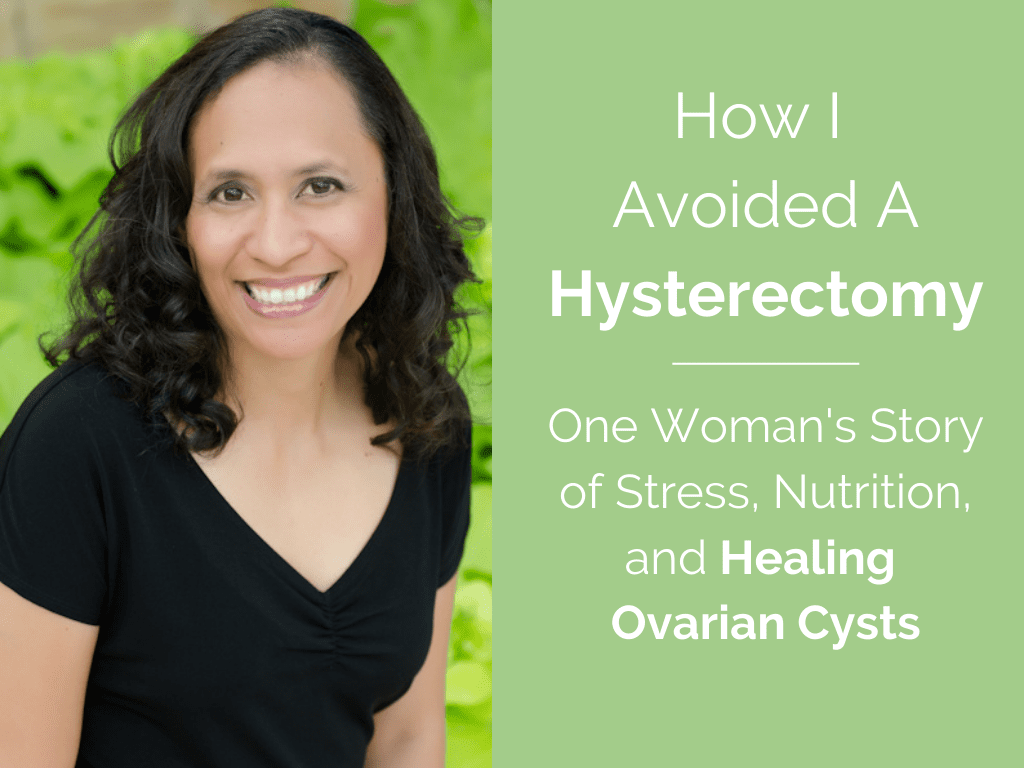 Darlene was part of my team for nearly two years. Hard working, smart, diligent and detailed, she and I somehow barely ever talked about personal things. She reached out one day with the kind of diagnosis hundreds of thousands of women hear each year: ovarian polyps and cysts. Her doctor’s advice? Remove the uterus. Western medicine renders women’s organs useless beyond our child bearing years. As if the uterus was a useless organ. As if there were no factors that need to be uncovered that caused it to be full of polyps and cysts. I still remember our emotional, frank but hard conversation as Darlene wasn’t sure if she wanted to put in the work. She did and this is her story.

My journey with hormones gone haywire started in 2000 after the birth of my first child and a bout with postpartum thyroiditis—a condition where within a few months after birth, the thyroid gland becomes inflamed, releases too much thyroid hormone, then too little, and then it returns to normal. Luckily, I dumped the first endocrinologist I saw who told me I had hyperthyroidism and would need to have my thyroid destroyed with radiation, and instead, I’d found an endocrinologist who took a wait-and-see approach, confident my thyroid hormone output would normalize.

My thyroid gland did begin working normally within a few months, but I was warned that with subsequent births, the postpartum thyroiditis would likely return and that someday, I could eventually develop hypothyroidism. Sure enough, with the birth of my daughter two years later, my thyroid went crazy for a few months again before going back to normal once more. Twelve years later, in 2014, I did indeed develop hypothyroidism, and then it ended up being Hashimoto’s.

It Wasn’t Just My Thyroid

In the years between thyroid challenges, I struggled with severe adrenal fatigue, fluctuating sex hormones, and reproductive disorders caused by estrogen dominance. In the mid-2000s I developed severe allergies and adult onset asthma. In 2011 I was diagnosed with uterine polyps which were removed by hysteroscopy, and by the following year, I began testosterone replacement therapy. In 2016, the telltale symptoms of more uterine polyps began, and upon examination, I was told I also had a couple of ovarian cysts.

But First, Let’s Go Back Again…

Throughout the years, it was difficult to find answers. When the adrenal fatigue started around 2005, conventional doctors brushed me off, citing chronic fatigue syndrome. Basically, they had no idea what was wrong and had nothing but antidepressants to offer me (which I refused). When I became so allergic that I couldn’t walk into a grocery store without having an asthma attack, I tried NAET and naturopathy (I took so many supplements) before finally caving into conventional treatment. Breathing took precedent over attempts at alternative remedies.

At some point, I went to a nutritionist who got me believing that there was something to food as means for healing. She was a raw foodist, however, and that wasn’t going to work for me and a young family. A friend of mine was macrobiotic, and I thought I could do that. I went vegan macrobiotic, shed a lot of weight and felt a lot better within weeks. I learned about the energetics and elemental nature of foods and cooking methods, and a lot of my symptoms improved. Eventually, I added fish and eggs back into my diet.

A couple years had passed before I had a name for my debilitating exhaustion. A friend had given me a book on adrenal fatigue, and my world opened up. By taking a protocol of adrenal glandular supplements, adaptogenic herbs and lots of B and C vitamins, my adrenals healed and I could function in the world again.

The Role of Stress in My Life

The one thing I’ve not yet addressed is my level of stress during this time period. My husband and I had started a business while I was pregnant with my second child, and so those early years with two young children and a growing business were very stressful. I have no doubt this pressure contributed to my adrenals burning out. In 2006 I left the company to become a doula, childbirth educator, and business coach. While I enjoyed the work, the stress of being on call wasn’t good. Added to all this was financial pressure due to the tech crash that directly affected my husband’s business, and the fallout—losing our home and eventually filing for personal bankruptcy. Being in a constant state of stress for so many years, I gave up my birth business and went into a hibernation of sorts sometime in 2011.

By that time I had found a chiropractor who did saliva and muscle testing, so I had a more customized approach to tackling my adrenal fatigue. Although he highly suggested I start eating meat again, I refused, (naively) believing my pescatarian ways were best.

At some point a few years later, after a period of working out intensely, relying on processed soy for protein and juicing a ton of (raw) kale for a few months, I came out the other side with burnt out adrenals (again) from excessive workouts, and not surprisingly, Hashimoto’s. I finally took my chiropractor’s advice and started eating meat by doing a Whole30 and taking on a Paleo way of eating. I cleaned out the dairy, wheat, and sugar that had crept back into my diet (I’d given up macrobiotics by then). During this time I also learned about fixing the gut and addressing inflammation, and also about finding food sensitivities through elimination diets.

It was shortly thereafter that I began working with Magdalena. I closed up a lot of holes in my knowledge about healing the body with nutrition, and I’d implemented many of her suggestions. It was when I was diagnosed with uterine polyps and ovarian cysts, however, that Magdalena’s advice to me really hit home.

What To Do About Those Ovarian Cysts and Uterine Polyps

My gynecologist offered me two choices. Since the cysts were benign, she said I could 1) have a hysterectomy and just be done, or 2) have another hysteroscopy. However, because I had polyps before, it would be highly likely they would recur, and she would not do another procedure, and would recommend a hysterectomy next time. I wondered about a third option, and I asked if she had ever had a patient who was able to resolve the polyps or cysts using dietary measures. She said that although they were likely caused by estrogen dominance, she didn’t have any experience with anyone who’d been able to shrink them with dietary and lifestyle changes. She was especially skeptical that the polyps would shrink. However, my doctor agreed to give me eight weeks to wait. I actually pushed it to 10 weeks.

When I told Magdalena about the diagnosis and my options, she made some nutritional suggestions. In addition, she urged me to do what was necessary to reduce stress, and she also suggested I do some inner, emotional work. Basically, she emphasized that if any inner work needed to be done, that physically, I could have my uterus removed, but energetically, unexpressed emotions that weren’t dealt with would manifest as disease elsewhere in the body. I believed this could happen, so I took heart and did the following:

In addition, a friend suggested I see an acupuncturist, so I began weekly visits for acupuncture and moxibustion and started taking Chinese herbal supplements. These treatments played a big part in my self-care, and I also rested more and did a lot of self-reflection during this time.

Ten weeks passed, and at my follow-up ultrasound, I was half-expecting to walk out of the office with an appointment card in hand for a hysterectomy. I was as surprised as my doctor (she was stunned, actually) to find that the polyps were gone and that the cysts, while still there, had shrunk. We agreed on one more follow-up ultrasound in four months.

I continued the same diet and herbs, adding in some foods based on my constitution at acupuncture appointments. I also continued making lifestyle changes, made an effort to reduce stress and dealt with my emotional issues. In my most recent visit a few weeks ago, my ultrasound showed that there was one cyst remaining that was about 3mm in diameter, and my doctor suspected it might just be scar tissue from my previous hysteroscopy. Because of these results, we decided that I no longer have to come in for follow-ups unless I begin having symptoms again. Yay!

In addition to healing the polyps and cysts, the efforts I made resulted in me lowering my thyroid meds and eliminating some of my asthma meds. As a Type-A personality, I continue to push myself sometimes, but I try my best to be mindful of good nutrition and rest.

I’ve spent over a third of my life dealing with hormonal issues, and much of it stems from chronic stress. I’m really glad that there is now more information and research online about thyroid issues, adrenal fatigue, and estrogen dominance. More importantly, I’m grateful that there are professionals such as Magdalena with a passion for educating and helping women afflicted by the conditions caused by hormone imbalance.

A doula trainer once taught me and some fellow doulas that we are our own best primary caregiver, and I’ve kept that in mind ever since. I’ve long been a believer that food is medicine, but up until the past year, I was missing some crucial information. Because of Magdalena and what she teaches, I’ve come to see that women truly do not have to suffer from symptoms and conditions that estrogen dominance causes. Unfortunately for most of us, seeing a change in our symptoms requires us to make changes—to the way we eat, the way we think and how we move in the world. Our disease didn’t happen overnight, and it is a fallacy to think we can just take some pills or have an operation and we will be healed. I hope that if you are reading this, and if you have been plagued with health problems, you’ll do some due diligence and commit to making nutrition and lifestyle changes in your life. Magdalena’s book Cooking for Hormone Balance will absolutely teach you a lot of what you need to know, but you’ll also have to do the work to reap the benefits. It’s possible to give up foods you thought you could never live without, eat really well, and come out on the other side healthier in mind, body and spirit. I hope you’ll have the courage to take the leap.

If you’re struggling with estrogen dominance and would like to learn more about how to balance your hormones, we invite you to join the Estrogen Reset program.

This is a great resource if you are suffering from:

You can enroll in the Estrogen Reset program here.

Darlene MacAuley is a small business coach (www.inspiredbirthpro.com) who helps birth professionals start and grow their businesses so they feel free to share their authentic selves with the world and make an awesome living doing the work they love. She lives in Austin, Texas with her husband, two beautiful teens and one spunky jackhuahua. She’s obsessed with small kitchen appliances, NYC, and the Hamilton soundtrack, and most recently she created a homeschool high school course for her daughter – A Survey of Broadway Musicals – just so they’d have a legitimate reason to go see more musicals.

7 Comments to How I Avoided A Hysterectomy—One Woman’s Story of Stress, Nutrition, and Healing Ovarian Cysts

What is Wrong with Your Healthy Snacks?
Chocolate Avocado Pudding Recipe