What You Will Learn In This Article

My team and I wrote this article to address this misunderstood trace mineral. On one hand, so many women are deficient in iodine which is key in our breast and brain health. On the other hand, some people should not use it at all.

When I was in private practice, I used to see people who were put on high doses of iodine by their doctors and felt very sick for months at the time. Some even developed hyperthyroidism.

So, what is going on? This article will help you understand iodine and if you should or should not supplement.

Iodine is a trace mineral that is naturally present in seawater. Through the food chain, it travels from seaweed and seafood to other foods available inland. Even so, people who live far from the coasts are more susceptible to iodine deficiency due to lower levels in the soil where their food is grown. In fact, about one-third of the world’s population lives in an iodine-deficient area such as the Great Lakes, Appalachian, and Northwestern regions.

On the periodic table, iodine is represented by a capital letter “I” and is located in the same column as fluorine and chlorine. For that reason, fluorine and chlorine can displace iodine in the body, causing health problems. You can learn about how drinking water with fluoride affects the body here.

Some History on Iodine

Iodine was first added to salt by the Morton Salt Company in 1924 as it was discovered that there were areas of the United States where iodine deficiency was quite common. These included the Great Lakes region and the Pacific Northwest. Large numbers of people were developing goiters due to iodine deficiency. After introducing iodized salt to the American diet, incidences of goiters and other symptoms of thyroid disease, including cognitive deficits, decreased.

In fact, a 2017 study looking back at the introduction of iodized salt, found that the addition of iodine to salt back in 1924 had the effect of raising IQ for those most deficient in iodine. It’s now known as the “Flynn effect.”

While iodine deficiency due to low intake is no longer common in the United States or other developed countries due to iodized salt, iodine supplementation can be helpful for some people. However, it’s not for everyone. (Read on…)

Who Should Not Add Iodine

Those with Hashimoto’s Thyroiditis (autoimmune low thyroid) should not add additional iodine to their diets. The reason for this is that iodine can cause a flare up of the Hashimoto’s symptoms and disease process due to an increase in TPO antibodies. In a study of over 3,000 individuals in China, an increase in iodine (“more than adequate” or “excessive”) intake was associated with a greater risk for hypothyroidism and elevated TPO antibodies over the 5-year follow-up period.

Basically, iodine is a micronutrient that is needed in small amounts for good health. Too little, and you have hypothyroidism (and maybe a goiter). Too much, and your immune system starts attacking your thyroid, resulting in a diagnosis of Hashimoto’s.

So, if you have ruled out Hashimoto’s and you have fibrocystic breasts or other symptoms of estrogen dominance, that’s the time to consider adding more iodine into your diet.

The Role of Iodine in Your Body

Iodine affects a woman’s body hormonally in four ways: through the thyroid, the ovaries, the brain and the breasts.

Iodine is vitally important for the functioning of the thyroid. It is needed for the production of thyroid hormones thyroxine (T4) and triiodothyronine (T3). You can see iodine in the name of tri-iodo-thyronine. Iodine is needed by the main thyroid hormone, Thyroid-stimulating hormone (TSH), to release T3 and T4 and prevent the development of a goiter (an enlarged thyroid). You can see many women in central Africa having massive goiters – due to iodine deficiency.

After the thyroid, the ovaries have the highest concentration of iodine. That’s because the ovaries need iodine for their production of the hormone estrogen. Insufficient iodine may lead to high levels of estrone and estradiol and relatively low estriol levels. Ultimately, this raises a woman’s risk for estrogenic cancers including ER+ breast, uterine and ovarian cancers. In our brain, iodine’s main role is through its work in maintaining healthy thyroid function. According to the National Academy of Hypothyroidism, poor thyroid function is associated with brain fog, difficulty concentrating, memory problems, unexplained anxiety or irritability, depression, poor self esteem, reduced reaction time, and more.

Iodine’s role in brain health goes back to the mother’s iodine status in pregnancy. The baby’s brain development can be severely compromised depending on the level of iodine deficiency. It can lead to anything from a mildly lowered IQ to visual problems to severe facial deformities and cretinism. Cretinism is characterized by mental retardation, primitive reflexes, visual problems, facial deformities, stunted growth, and paralyzed limbs. Even in early childhood, iodine deficiency may lead to hypothyroidism and result in cognitive deficits, such as difficulties with spelling and reading.

Thyroid hormones, T3 in particular, are responsible for the production of neurotransmitters in the brain and may even play a role in schizophrenia.

Iodine is important for the body to maintain healthy breasts. An iodine deficiency can lead to a build up of “dirty estrogens” and a state of estrogen dominance, as mentioned earlier. This can ultimately result in diagnoses of fibrosis, hyperplasia, and even breast cancer.

Iodine is also used by the mammary glands during pregnancy and lactation. It’s thought that the mammary gland (breast) captures the iodine in order to provide the growing baby with the iodine necessary for making his or her own hormones for healthy development of the brain and nervous system.

The Benefits of Iodine

Some benefits of supplementing with iodine include the following:

In cell studies, iodine has been shown to have anti-cancer activities in breast cells as it works on the estrogen pathway. In a review of three different studies on iodine for fibrocystic breasts, supplementation helped improve pain and other symptoms with different forms of iodine impacting the level of improvement (molecular iodine worked best). Researchers from University of California Berkeley suggest that iodine from kelp (700 mg kelp in capsules per day) helped improve symptoms in women with endometriosis.

It’s interesting to note that there is a high rate of breast disease in women who have thyroid problems, suggesting that the two might be related. Iodine supplementation has been shown to be helpful in both. HOWEVER, as mentioned earlier, if you have Hashimoto’s and elevated TPO antibodies, adding iodine can do more harm than good. It’s best to work with a functional medicine practitioner to get your antibodies down (below 100) before gradually adding in iodine—with the guidance of your practitioner.

Most people think of iodine for the thyroid just for its role in the prevention of goiter. But beyond preventing goiters, iodine is also important for thyroid function in general since it’s used in the production of thyroid hormones thyroxine T4 and T3. It also reduces the thyroid’s response to the thyroid-produced hormone, thyrotropin (TSH), so that it doesn’t break itself down through oxidation.

While not everyone should add iodine in the form of a supplement, most people can safely enjoy these naturally iodine-rich foods—as long as you don’t have a specific allergy or sensitivity. 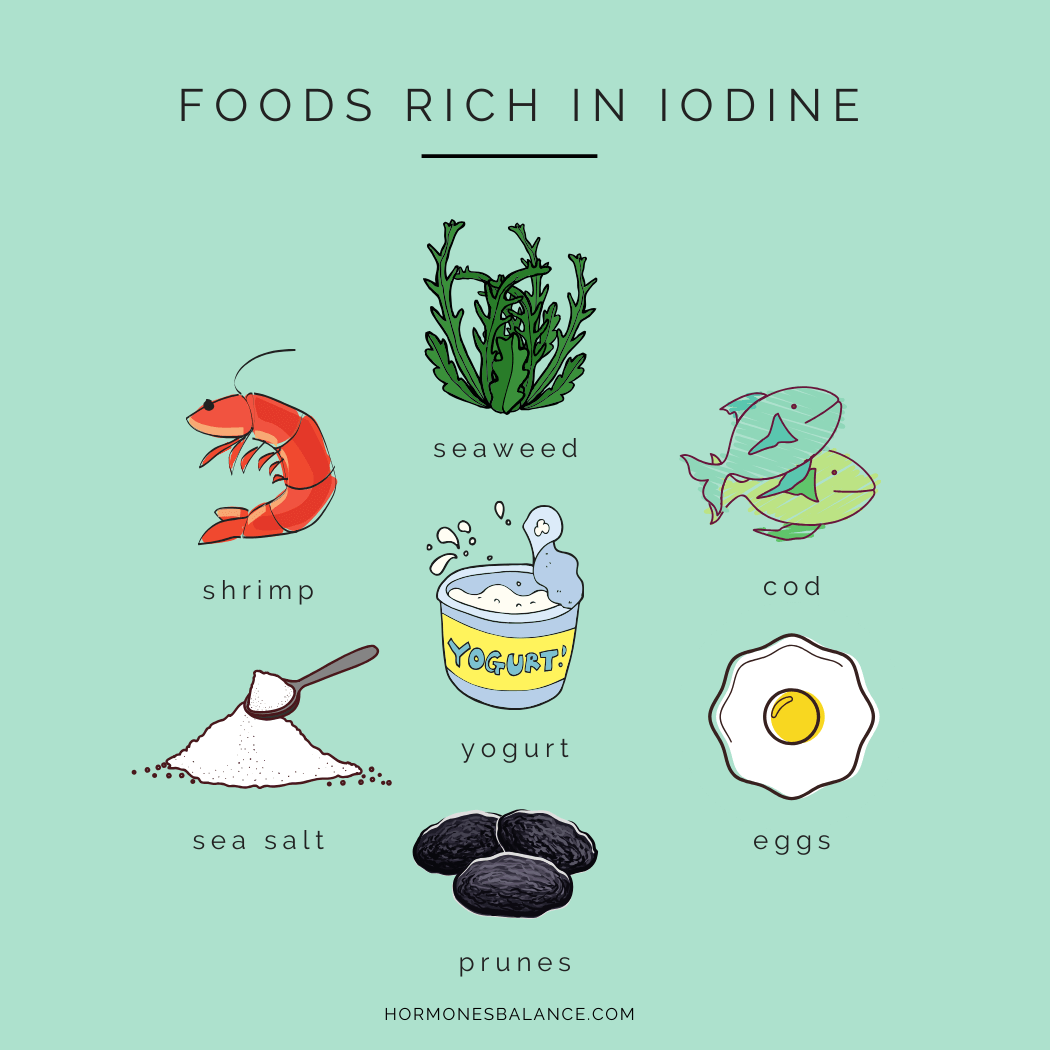 Iodized Salt – Yes or No?

Unfortunately, iodized salt tends to be very far from naturally occurring sea salt or rock salt. It has been chemically stripped down from a full spectrum of minerals including sodium and chloride to simply sodium chloride. Then iodine is added back after the fact, as mentioned earlier. Since it is no longer recognizable by nature, a stripped down compound like this, even with the added iodine, acts more like a toxin in the body than a nutrient.

My favorite is pink Himalayan salt but it only contains minimal traces of iodine. Seaweed would be your best source of iodine.

The best way to include more iodine in your diet is to start adding seaweed into some of your dishes.

*A side note here is that you may come across some bright green seaweed salad—AVOID it. Natural seaweed is not that shade of green. Green food colorant is added, which is certainly not healthy and may set off reactions in some people.

Here’s an example list of ingredients often found in fake seaweed, which you can usually identify by its bright green color:

Here are a few recipes to help you get more seaweed in your diet:

Kombu seaweed speeds up the cooking of beans and makes them easier to digest. Check out these recipes to see how it works:

If you’re concerned about finding clean sources of seaweed, make sure you’re not getting seaweed from China. Two reliable brands that do regular testing to ensure purity include Eden Organics and Maine Seaweed.

Getting seaweed in your diet regularly and on an ongoing basis isn’t practical for everyone. In that case, it’s best to add a high-quality supplement.

What I recommend: Women’s Daily Multi. Our Women’s Daily Multi is fortified with iodine, if you’re looking to get an extra dose. It’s a multivitamin designed specifically for endocrine and sugar balance. The minerals in this formula are true chelates and made by Albion, the leader in manufacturing mineral chelates with superior absorption. This product includes vitamins A, Bs, C, D, E, as well as magnesium, zinc, and selenium among other nutrients vitamins. Vitamin Bs are in methylated form. Replenish your iodine levels to support your thyroid and hormones. Before long, you may feel like you’ve regained a feeling of mental sharpness, balance and vitality.

Aceves, Carmen et al. “Is Iodine A Gatekeeper of the Integrity of the Mammary Gland?” Journal of Mammary Gland Biology and Neoplasia. April 2005.

How to Pick a Safe and Quality Mattress
Soothing Calendula Lotion for Dry, Irritated Skin