Why Does Organic Farming Leave Us Depleted? In this article, we’ll cover the vital roles of minerals in our health, and why even organic food alone isn’t an adequate source.

Many years ago I was invited to a health talk about the loss of nutrients in our soil. The presentation turned out to be a multi-level marketing (MLM) supplement sales pitch, so I felt skeptical about the validity of the content. I was adamant back then that food alone can correct all nutritional deficiencies.

Over the years, as I developed vertical ridges on my nails and mouth sores, I’ve come to a solemn conclusion that food alone isn’t enough to keep me nourished and well.

In this article, I want to offer you a detailed and science-based explanation of why today’s food (even organic food) may not be enough, and what you can do to correct mineral deficiencies. Food: Not as Nutritious as It Used to Be

If you’re working on getting your health in order, you’re probably encountering all kinds of new questions:

All of these dilemmas really come down to one question: Do our modern farming practices result in health-promoting food that meets our nutritional needs to keep us nourished and healthy?

Magazines, health food stores, and supplement companies put out information claiming that food isn’t as nutritious as it used to be—but is that really true?

It turns out, yes.

In fact, this is not a new question. Even a 1936 USA Congressional Record stated:

“Laboratory tests prove that the fruits, the vegetables, the grains, the eggs, and even the milk and the meats of today are not what they were a few generations ago (which doubtless explains how our forefathers thrived on a selection of foods that would starve us today).

It is bad news to learn from our leading authorities that 99% of the American people are deficient in these minerals, and that a marked deficiency in any one of the more important minerals actually results in disease.

Any upset of the balance, any considerable lack of one or another element, however microscopic the body requirement may be, and we sicken, suffer, and shorten our lives.” – Senate Document No. 264, 1936. 74th Congress, 2nd Session.

A 2006 study of 20 individuals (14 athletes, 6 sedentary) published in the Journal of the International Society of Sports Nutrition analyzed the micronutrients of their diets which were intended to improve their micronutrient intake. The seven minerals included were iodine, potassium, calcium, magnesium, phosphorus, zinc, and selenium. A few additional highlights from the scientific literature:

Eating healthy is no longer enough to give our bodies what they need to maintain optimal health. We’re lacking in vital nutrients – especially key minerals.

Minerals are vitally important for good overall health and balanced hormones. They support three primary components of the human body:

The major minerals for the human body (required in amounts of at least 100 mg per day) include calcium, chlorine, magnesium, phosphorus, potassium, sodium, and sulfur.

Of course, some of these are toxic in higher doses, which is why we talk of poisoning occurring from aluminum, arsenic, lead, mercury, or cadmium. Poisoning can come from other minerals as well if they are taken in excess of the tolerable upper intake.

Certain minerals are especially important for hormone balance. Check out these articles on the site:

Ultimately, getting our minerals up to ideal levels is going to go a long way toward regaining or maintaining balanced hormones.

Food may be depleted in minerals compared to the farming of the past, but it’s still important. In my cookbook, Cooking For Hormone Balance, you’ll find over 125 easy, delicious recipes to nourish your body and balance your hormones without calorie restriction or deprivation. All of the recipes are based on 20 hormone-supporting superfoods and 20 hormone-supporting super herbs—with modifications for Paleo, Paleo for Autoimmunity (AIP), anti-Candida, and low-FODMAP diets. You can get a copy of the cookbook here.

How We Used to Farm Versus Today

In the past, farmers were much more likely to see themselves as the earth’s stewards, preserving the mineral-rich soil for seasons and generations to come.

To accomplish this, they would return mineral-rich wastes from both plants (compost) and animals (manure, bone meal, fish emulsion) to the soil to feed the microorganisms that thrived there. The plants would then assimilate those minerals and other nutrients and make them bioavailable to humans and animals that consumed them.

This still happens today, but to a lesser extent when the soil is lacking minerals. This is in part due to our negligence in purposely adding mineral-rich substances back into the soil.

Besides adding plant and animal wastes back to the farmland, crop rotation was once a common practice.

This method involves allowing a portion of the farmland to rest each year, with manure from grazing animals added to the soil during that year to help replenish the minerals.

Then it would be enriched yet again, ready for its turn as active farmland. A different portion was allowed to rest each year in a rotating manner.

As a part of the crop rotation, some farmers also chose to plant the land left fallow with particular crops that could restore it. Alfalfa is a crop commonly used for this purpose, as it has very deep roots (20+ feet) that can reach down to where the soil is still replete with minerals.

As the alfalfa is plowed under, those minerals are brought from the alfalfa roots to the topsoil, restoring the mineral levels for the next crop. This practice only works until the minerals from that layer of soil are depleted. Then other methods are required.

Without those traditional farming practices, the farmland gets demineralized over time, leading to lower quality produce from that land. The following charts give you an idea of how the mineral content of our foods has declined or changed over time:

So, why the change? What did we add to the soil? Again, in the past, farmers added things like manure, compost, bone meal, fish emulsion, and pulverized minerals to re-enrich their farmland.

What do we use now? Commercial farming tends to rely on something called NPK.

The Modern Fertilizer Dilemma: NPK (Even in Organic Farming)

While traditional farming methods have relied on plant and animal waste to replenish the soil, NPK is the standard fertilizer used in modern farming, including organic.

The letters N-P-K stand for Nitrogen, Phosphorus, and Potassium (K is the chemical symbol) that make up the bulk of this blend. Sometimes, you’ll find NPKS, which includes sulfur.

Beyond air and water, plants do require N, P, and K as their primary nutrients. And while it’s certainly beneficial to add back these nutrients, the problem is that all other nutrients are omitted. That means our soil is still lacking in secondary nutrients such as magnesium, calcium, and sulfur, plus the trace elements: iron, zinc, manganese, boron, copper, molybdenum, and chlorine.

Not only is NPK-fertilized farmland lacking in important minerals, but it also results in plants and produce that are lower in vitamin C and iron. The potassium chloride that is part of the NPK leads to soil that is depleted of its magnesium, zinc, and calcium. It also causes selenium to be bio-unavailable to the plants that grow there. As a result, produce from that farmland is lower in magnesium, calcium, zinc, and selenium.

As U.S. Surgeon General Elliot Koop stated in 1988 (already over 30 years ago), “Our major health problems are no longer infectious diseases or diseases associated with malnutrition, but are now those associated with dietary excesses and imbalances.” These imbalances are in part caused by the lack of minerals in our soil.

Are you Mineral Deficient?

Most of us are these days. However, if you’d like to know for sure, you can order labs here. The Transformation Panel Plus DUTCH will check your ferritin (Iron), magnesium, selenium, and zinc.

Choosing to eat organically can help somewhat, but most organic farmers use NPK as their fertilizer of choice. Organic produce may be richer in nutrients and safer due to the absence of synthetic chemicals, antibiotics, hormones, or genetically modified organisms (GMOs), but it is still lacking the micronutrients and trace minerals so many are depleted in.

A farming method and paradigm known as biodynamic farming may be the best way to go. The more I’ve learned about biodynamic farming, the more passionate about it I’ve become. According to the Biodynamic Association website, “Biodynamic Farming is a holistic, ecological, and ethical approach to farming, gardening, food, and nutrition.”

Biodynamic farming came to the scene in the 1920s with the ideas of scientist-philosopher, Dr. Rudolf Steiner, who believed modern ways of farming with synthetic fertilizers and pesticides would lead to reduced health, vitality, and fertility of land, vegetation, animals, and humans. He recommended a holistic way of farming – to the extent that he saw the farm as a self-sustaining organism with every system and species needing to work together to function as a whole. Some of his ideas led to the rise in Community Supported Agriculture (CSAs), which have become quite popular in recent years.

The problem when it comes to biodynamic farming is that it’s still rare (found only at a few farmers’ markets), not standardized, and may be overly rigid. It may be difficult for family farms to adopt all the practices of biodynamics to become an authentic biodynamic farm. However, a great many organic farms come close, and may ultimately adopt more biodynamic practices in the future.

While eating organically or biodynamically is a great start, you still may not get all the nutrients you need from food.

What I Recommend for Micronutrient and Mineral Replenishment

In addition to choosing organic or biodynamically grown foods over conventional, supplements can be a great help – especially since we are subject daily to a lot more stress than our ancestors were. This can cause or accelerate nutritional depletion.

The increased daily stress increases our bodies’ requirement for minerals than if we were living a lifestyle more congruent to the earth’s natural rhythms. 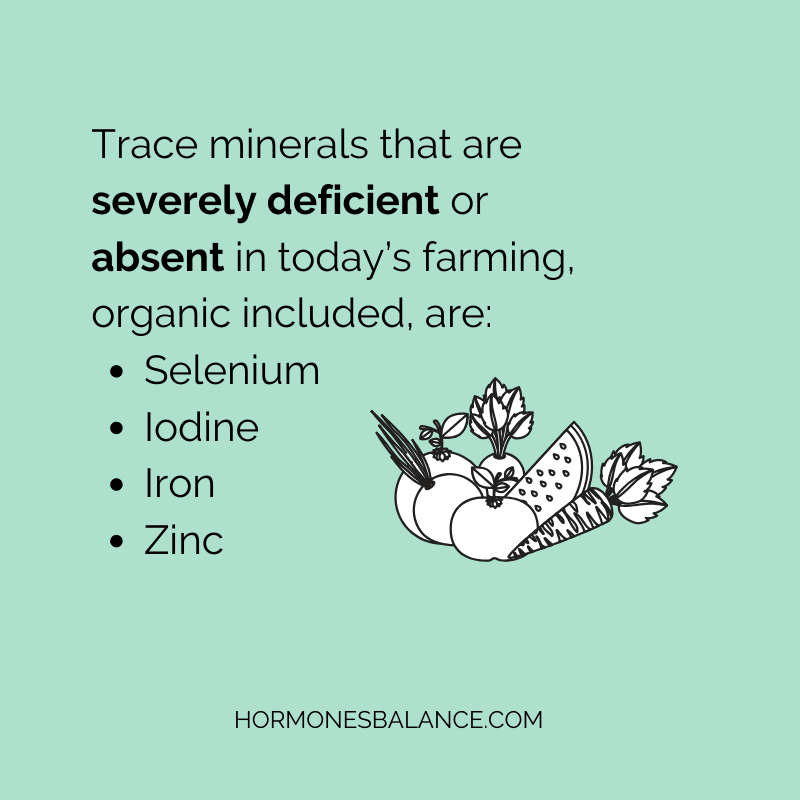 Minerals we know to get quickly depleted by stress include magnesium and zinc.

Trace minerals that are severely deficient or absent in today’s farming, organic included, are:

If you want to replenish your reserves, I highly recommend taking a multivitamin and mineral supplement – particularly, our recently reformulated product: Women’s Daily Multi.

We included the following nutrients and minerals:

How to Take: Take two capsules twice daily, or as directed by your healthcare professional.

6 Comments to Why Does Organic Farming Leave Us Depleted?